In the same way that Francis Wolff was the image of Blue Note (Thelonious Monk, Herbie Hancock, John Coltrane…), that Pedro Bell was that of P-Funk (Parliament and Funkadelic, George Clinton’s two bands), or that Peter Saville was that of Factory Records (New Order, Happy Mondays…), At Certain Radio…), the British graphic artist and designer Vaughan Oliver, who passed away this week at the age of 62, saw his story intimately linked to that of the London label 4AD (Cocteau Twins, Pixies, Dead Can Dance…), whose visual identity he created for more than 20 years.A career linked to a label, and to a man first, Ivo Watts-Russell.

The meeting between the two Britons took place in London, in the early 80s, in an England immersed in the punk wave that saw the Sex Pistols, The Fall, Buzzcocks and even Joy Division considerably change the game here and elsewhere.Vaughan Oliver, too, saw the wave coming, but from loin : he comes from Sedgefield, in the county of Durham – clearly working class culture – light years away from the cultural and social demands of the London capital, and even far away, at least in terms of urban energy, from what will happen in Manchester via the Factory label from 1978 onwards.

Attracted by Dali’s pictorial surrealism, by Roger Dean’s (the man behind the Yes group’s images), and later by Lynch’s cinematographic surrealism, he landed in Newcastle, even further north, a stone’s throw from the Scottish border, to study graphic design.And since in the 80’s, as today, work is not so much in the north of England as it is today, he manages at the end of his studies to move to London, to try to apply what he learned in school in the field.He was 21 years old at the time, and was the holder of a graphic culture which, he later confessed, did not even then go as far as the Bauhaus, the German movement which nevertheless had its small importance in European graphic design .

In London, however, he quickly found a job in packaging, then another for two years with Michael Peters, a designer who specialized in commercial marketing.It works for him, but he’s not passionate about that life.Hanging out in concert will save his ass.And will change his life.

A rock music fan and already equipped with a solid personal discotheque (record covers were, for him as for many post-60’s teenagers, his first real confrontation with visual arts at the same time as his personal art gallery), Vaughan regularly meets a young music guy, Ivo Watts-Russell, who has just launched, via the parent company Beggars Banquet, the label 4AD, marked rock and who will soon be associated with the most demanding of British noise pop, new wave, dream pop, shoegaze music.Peter Kent, also originally affiliated with 4AD, has already left the adventure, heading for Situation Two, again supported by Beggars.Together, Ivo and Oliver sometimes discuss music, a little graphic design and soon a common interest is born.4AD needs a strong visual work, and Vaughan needs a new boulot ? The planets, on this one, appear to be aligned.It’s worth a try.

To find, for the label, an immediately recognizable identity, while not overdoing the identity of the bands themselves-mêmes ? Easier to think than to do.Except that this is precisely, and despite a total lack of experience on the subject of the principal, what is happening.Vaughan is hired by 4AD, of which he will even become the first employee – he will break away from this commitment later, preferring the freedoms offered by the freelance status – and will start with the label a collaboration that will never really stop.Gathering Dust from Modern English : her first work in 1980 for 4AD shows a couple close to a television set occupying much of the glowing space of the room, while Mesh & Lace (still Modern English, 1981) offers this disturbing image of a man tied up, bare-chested and blindfolded in what appears to be a shed.Above him, hanging on the wall, a sardine.We were talking about Dali and Lynch and surréalisme ? We’re in the middle of it.Many other covers will follow, and the young Durham County graphic designer will find himself illustrating, on behalf of the most famous London indie label of the 80’s, some of the most famous records of the decade, and even of the following one.

At the age of 26, and in order to give a more formal framework to this solid new collaboration, he founded, with photographer and video artist Nigel Grierson, the entity 23 Envelope.It is with him that he will create, until 1988 (date when Nigel will leave towards other horizons, and where he will found in compensation the v23 studio), the bases of the 4AD leg, and of these covers which suggest atmospheres, open doors, windows, close others, offer a parcel between the world of the concrete and that of the near future.A surreal and almost unconscious vision of music in short and one of the best manifestations of this fantasy, which many, at that time, experienced for real.Listen to the music.Look at the pouch you’re holding in your hands.Drift.And repeat the ritual over and over again.

He wants to dig into the music, see what’s behind it, inside it, originally, afterwards.Quickly, and when you rummage through a vinyl tray in a record shop – and soon a CD tray, a transformation that will plunge Oliver into deep melancholy and cause a real personal questioning of his work -, Whether it’s a British shoegaze band or a compilation telling the Mystery of the Bulgarian Voices (the label’s curious but relevant foray into Balkan folk music in 1986), we know it’s 4AD, and without even having seen the three-character, two-colour logo yet.An innate understanding, for Oliver, of what groups want and how best to get them on valeur ?

A proximity with the bands in question, above all, which explains from the outset this inexpressible but obvious link between music and visuals.In a period where 30 records are not yet released per week, and where music is consumed, not via streaming platforms on which one changes tracks at the same time as one’s mood, but on these decks that one must return to after 25 minutes, the relationship to listening, of course, is different, and the relationship to creation is also different.We’re going slower, the emergency can wait.Vaughan usually picks up demos from albums in progress.He sometimes has access to one, two, three versions of an album that will be released a few months later in an even different version.As a privileged observer of the always immensely complex process of creating a record, he is also one of its actors.Always, and during the interviews he has been able to give during his career, he was keen to specify the involvement of groups in this visual creation, and the role of collective discussion in the service of a global reflection.

A portrait of Mozart as a scarecrow to accompany The Wolfgang Press’ Scarecrow (1984).A red toothbrush (and no toothpaste) surrounded by Catholic crucifixes for the eponymous disc from Ultra Vivid Scene (1988).The portrait, not immediately visible, of a girl, with a scar widely suggested for Scar (1989), Lush’s album.And then for Vaughan, soon to be the masterpiece, or at least the centerpiece of his collection , which will soon join that of many other teenagers, young adults and music lovers of the 90s and beyond.Transforming music into an object, giving it a physical dimension.That’s the idea.That’s what he gets at faire : “For me, music is really just a mathematical formula,” Frank Black, aka Charles Thompson of the Pixies, told him one day as he once again spent time in the studio listening, understanding, discussing what’s going on and what’s going to happen.The formula, for him, is a shock, a demystification of the cursed artist who above all speaks from the heart, and an idea, just behind, which will give birth to one of the most emblematic covers of the 80s.

Mathematics reminds him of the Renaissance, Leonardo da Vinci, the formulas that one only understands when one is skilfully initiated into them.On the demos he had the opportunity to listen to, there is this track about a monkey that has just been sucked into a hole, heading for Paradise, which will become the title Monkey Gone to Heaven.For the cover of the forthcoming record – which was almost called Whore (Putain, in French) but which finally became Doolittle – it thus represents this monkey adorned with a halo and surrounded by a few numbers – 5, 6 and 7 – as if the little primate was about to begin, too, the enunciation of a scholarly mathematical formula.Now accompanied by the designer Christopher Bigg and the photographer Simon Larbalestier, they released in 1989 this cover in the shape of a bizarre bestiary that made an impact curieux : when we think of the Pixies and this album (the undeniable biggest success of the band), we instinctively think of the monkey, even before thinking of Buñuel and Dali’s surrealist Andalusian Dog, shouted on the single Debaser.

Dali, again, how about the Pixies’ fois ? The band and the designer were definitely meant to meet.They won’t let go, even after Ivo Watts-Russel sold his shares in 4AD to Beggars Group (as the group is now called) in 1999.Vaughan Oliver will illustrate all the covers of the Boston-based band, from the glowing planet to Bossanova’s Saturnian rings (1990) to the trompe l’oeil of Trompe le monde (1991), including the loose cover of Head Carrier (2016).

As opposed to a cerebral Peter Saville (Factory Records) to geometric creations – the other fashionable British designer of the time – Vaughan Oliver, for his part, claimed instead the idea of “visceral” creation.And that of pleasure, above all, provided with this systematic willingness to do things in a way that is a little different from others.Punk has been there, and Vaughan has learned the lesson of do-it-yourself, of “doing what you want to do”.Develop your own business, go looking for other, more prestigious clients encore ? He rather assumed, and for more than twenty years (after 99, he gradually detached himself from the label, but continued to illustrate records, and even taught at the University) to have above all made covers to illustrate his own record collection.This is the advantage when you work for an independent structure, and not for a very large house.

“Without Vaughan, 4AD wouldn’t be 4AD, and it’s no small thing to say when it is claimed that his style also contributed to the art of graphic design in general at the end of the 20th century,” wrote Ivo Watts-Russell last week when his death was announced.Some kind of visionary, Vaughan Oliver ? He would dismiss such praise with a wave of his hand.His evanescent and vaporous works for Cocteau Twins ? His gothic portraits and fascinated by This Mortal Coil ? The colourful but smashed ones for The Breeders ? Then, later, his collaborations with Scott Walker, TV on the Radio, or David Lynch ? No, the artists were the ones whose records he illustrated, not him.

Now it’s up to history to judge.And this one already seems to have an opinion on the matter. 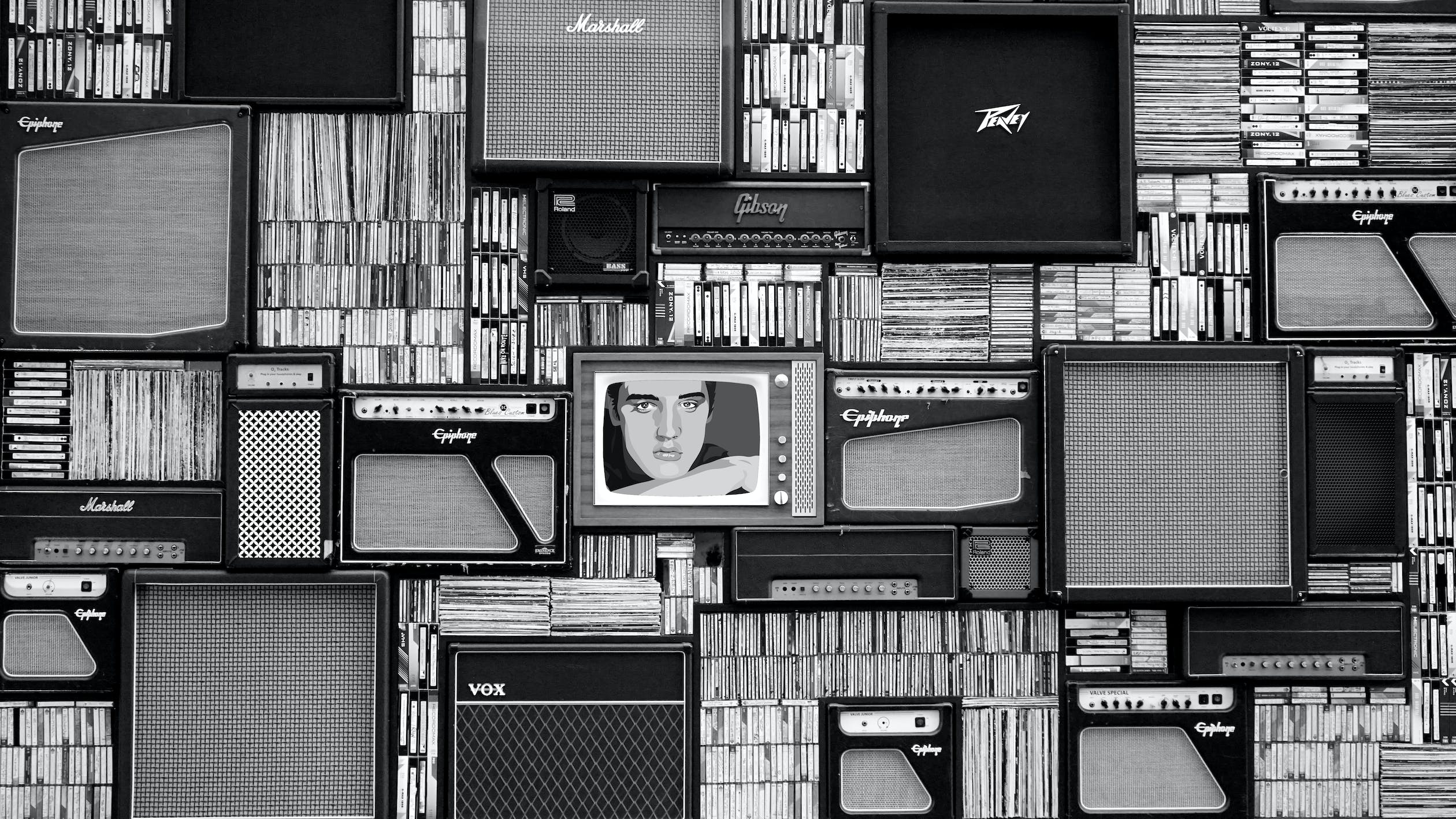